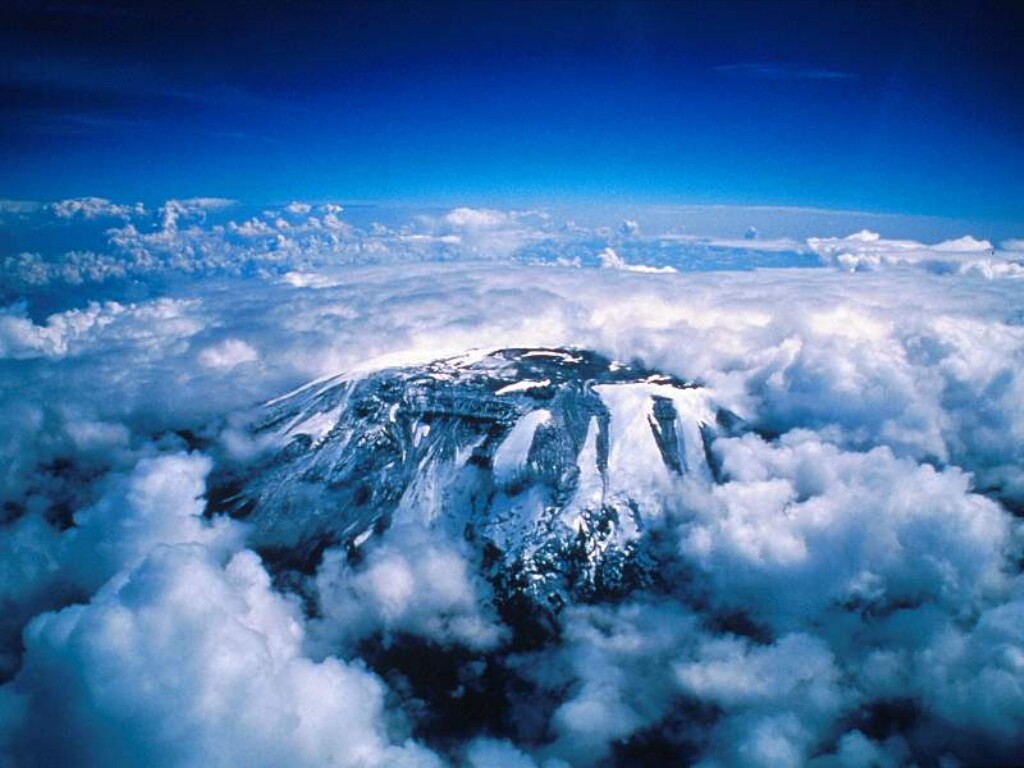 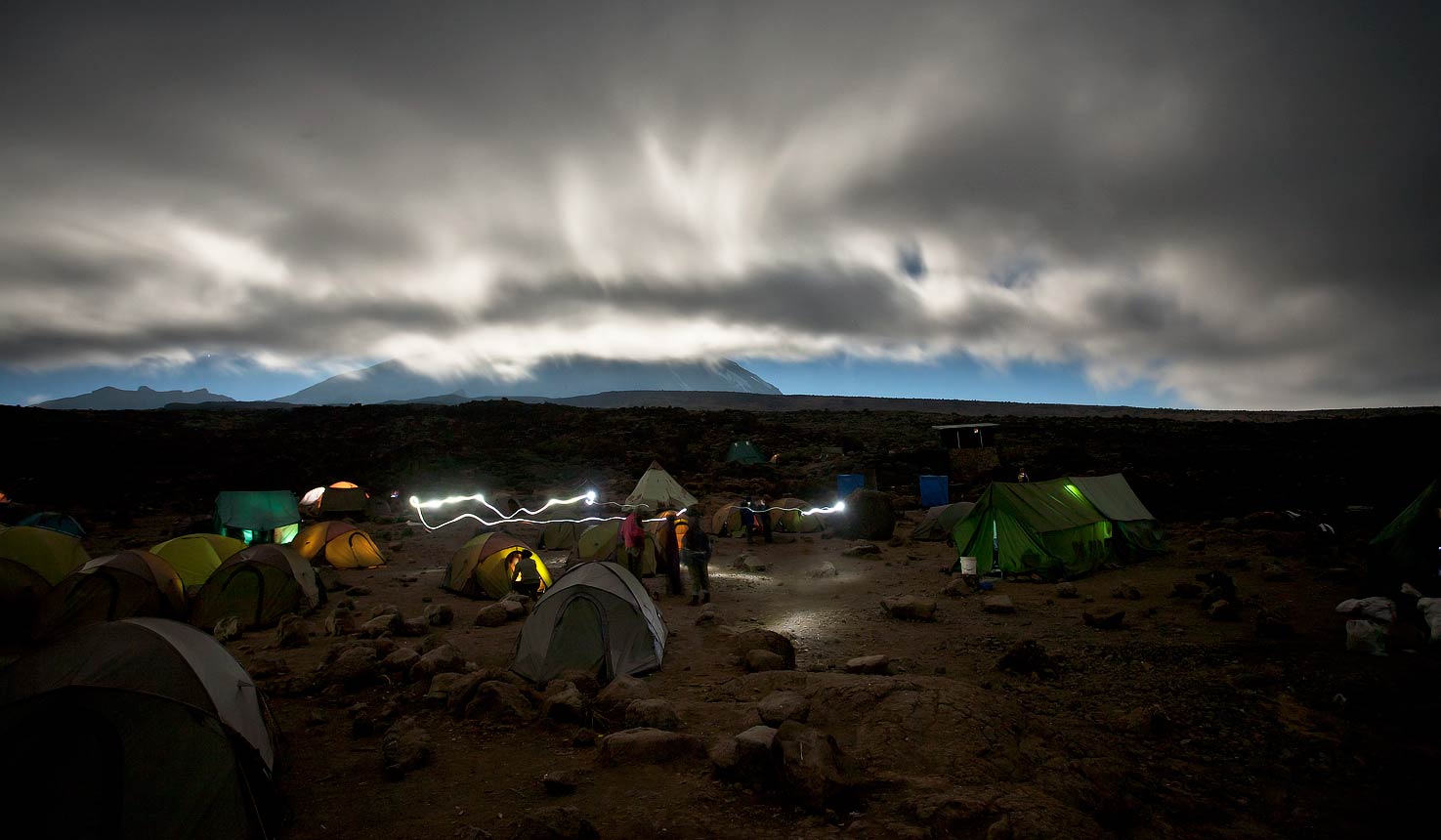 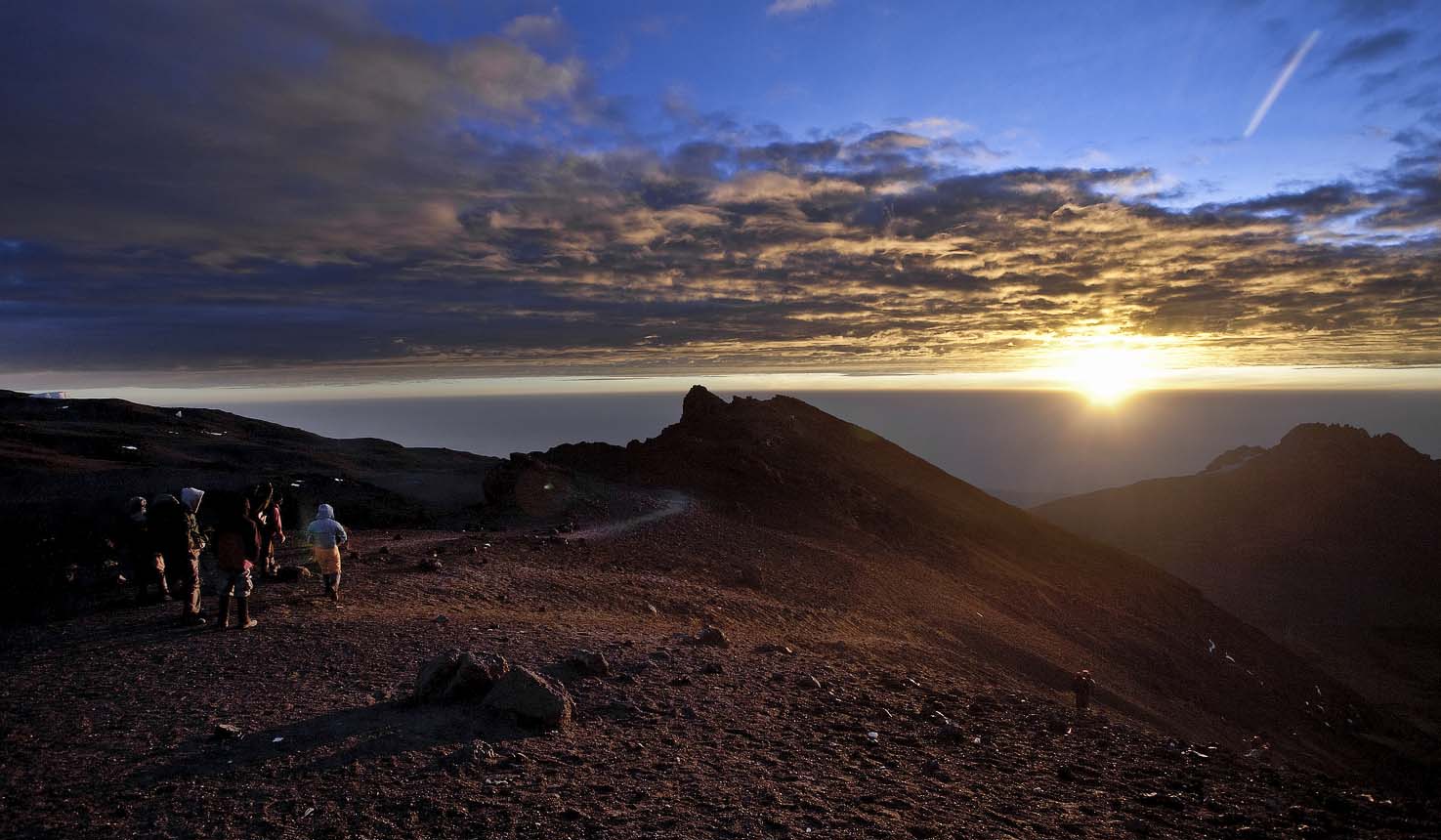 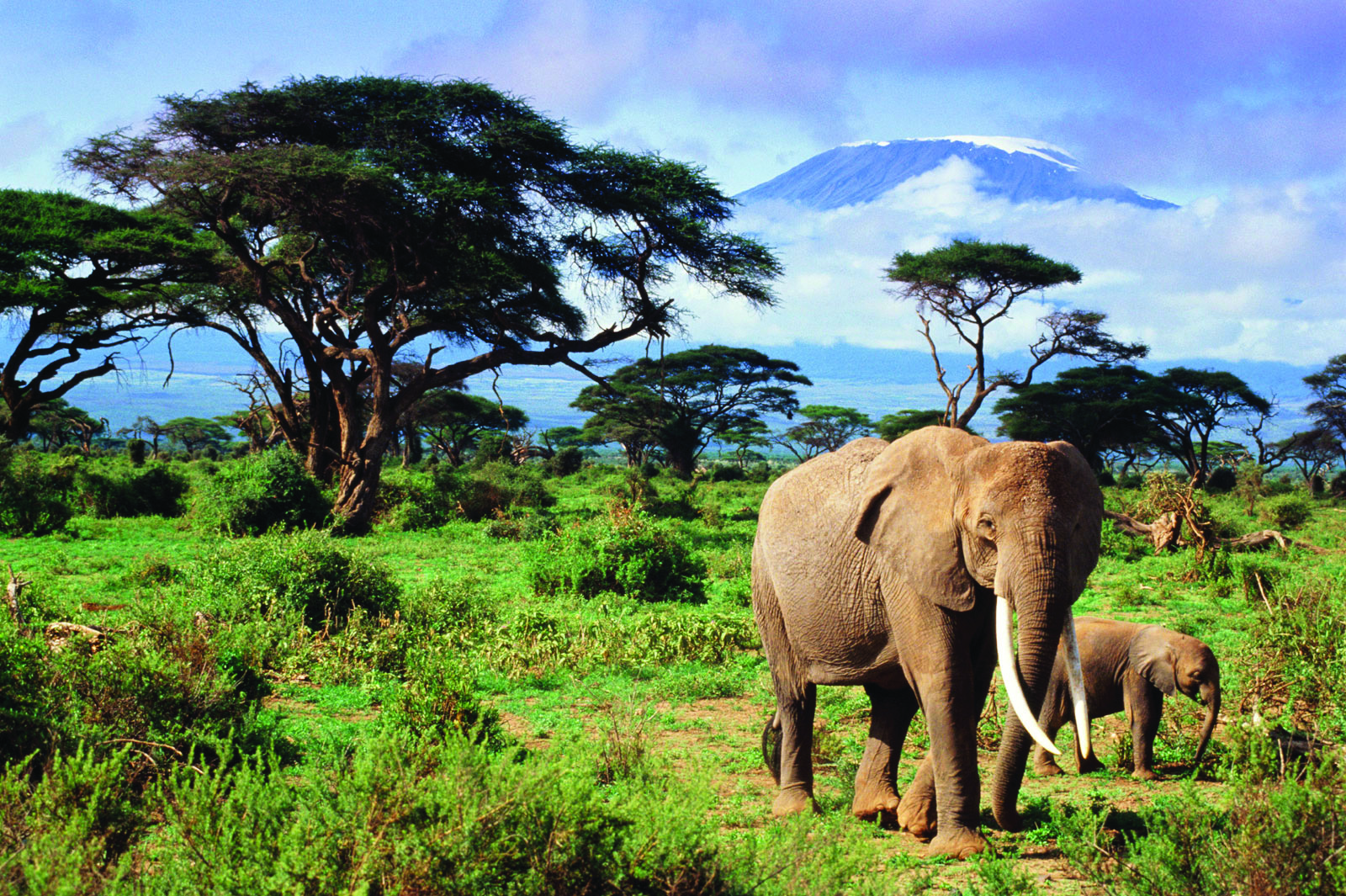 Excerpt from my magazine article, “Red Dirt, Sweet Smoke and Kilimanjaro in The Moonlight”: “. . . At High Camp, during the rest of the day, we keep staring up at that steep, unrelenting Western Breach – an immense, exposed wall looming above you and weighing down continuously on your chest. We are up against it now and can see no way clear. No matter how much we point; slice-and-dice it; there is no easy traverse in sight across that vertical face. And the numbers don’t lie. The altimeter reads: 15,990 feet. The unseen summit is 19,340 – so, that leaves 3,350 vertical feet to gain and only one last climb to do it all in. When we ‘casually’ ask the guides about our route, they vaguely point upward and say: “Oh, it looks much worse than it tis!” The plan from the beginning is to leave at midnight, climb in full moon light… but that will probably be a ‘wash’ – with all the bad weather we’ve been having. After dinner, we wander off to our tents but no one sleeps, each of us staring directly now into the Unknown, the Void that will define us. A fierce wind shakes our cocoons and when the wake-up call comes at 11:00 p.m., there is an inch of fresh snow plastered to nylon and ground.

If life is all about making successful transitions, one of the toughest is to leave the warm womb of your sleeping bag, roll out into the frigid darkness and put on cold clothes (can’t sleep in them or body moisture will render them ineffective rest of the day). “HAEL YEAH!” I grit my teeth; get dressed and head for the mess tent. Soon the four climbers and three guides are gathered at the table. Gone is the constant laughter and light-hearted banter that we have enjoyed all week. Faces now look empty; eyes strained; legs jiggle up and down. Jagat gloomily says she dreamed that she saw her life flash before her on the mountain. . . Jerome – I don’t even recognize. His soft, relaxed features and high-beam smile are gone. He has his ‘game face’ on. After quick gulps of tea, equipment checks, and topping-up our water bottles, we head out into the night. . . “TCB, Baby!” I say to myself – Elvis’s motto that always surfaces when it’s time to bring it – “TAKIN’ CARE OF BIZNESS!”

No need for headlamps. It is just as I hoped and planned for months ago. The full moon is a balloon just above us, bathing the mountain in bright light. And the cold and snow is actually a blessing, for it pasted down all the loose rocks and scree – made for firm footing. Immediately the first few steps are up. . . Jerome takes the lead; I am next; then Jim Lorentsen; and the others. For every mountain or marathon I like to have a mantra, something to “chant” to occupy the mind. Tonight I call out: “REMEMBER GUYS – FROM THE CHINESE: ‘LIFE BY THE INCH IS A CINCH; BY THE YARD IT’S HARD. . . ‘ LET’S JUST GO ROCK-TO-ROCK; STEP-BY-STEP. . . ”

Like his Maasai brother, Matika, who guided us on safari – Jerome proves that not only are the Maasai the most efficient long distance walkers on earth, but high altitude climbers, as well. His feet effortlessly flow upward, hardly seeming to touch down before they are in calm, smooth motion again. As hard as it is, I shadow Jerome – never letting him out of sight: my eyes sending a continuous stream of ‘live-video-feeds’ to my hands and feet so they copy exactly where he places his. But since he steps so lightly, I purposely kick-down-in with each of my steps (where there is earth), to help provide purchase for my team behind me.

We quickly run into trouble. A steep snow slope blocks our way. We need to get across but the slope is unmarked and drops straight down for hundreds of feet. The guides spatter back and forth in Swahili. Jerome then asks me to untie an ice axe from the back of his pack. He then carefully cuts steps: one-by-one into the snow/ice face. I had crossed such slopes before, but there was either a fixed rope to hold on to or climbers had his/her own ice axe to arrest themselves in case of a fall. There is no protection here. One slip and you are gone. . . Somehow, everyone makes it across!

Then we are into the thick of it – 40-50 degree slope. If you simply stand upright you start to fall – being peeled backwards off the mountain. So, acute angle of ‘forward-lean’ is now downloaded to everyone’s internal ‘hard-drive.’ Then – no longer the comfort of a trail, but complicated rock climbing up steep chutes and chimneys and out along overhangs where you are totally exposed.

Someone slips. . . I stop and tense. Then curse words as they somehow catch and right themselves. We all exhaaaaaale. . .

Another snow slope to cross – only this time its near vertical and Jerome can barely chip toe-holds in the brittle ice. . . Jagat begins hyperventilating and giving out weird “panic-attack” moans. James Martin, her boyfriend, tries to calm her. We are way past the point-of-no-return, and with 2/3rds of the mountain still to scale. I am of two divided, yet intertwined minds: worried about my own safety, and the safety of each of the others. We rest. “DRINK, DRINK!!” Jerome calls. It is critical to hydrate continuously in the cold, high, dry air. Must force down at least two liters during the climb or your blood turns to sludge and fatal pulmonary or cerebral edema could result (and if you wait until you are actually thirsty it is too late). I struggle to open my water bottle; and when I do the water is frozen solid! We put our bottles inside our parkas to melt the ice. . .

The other two guides inch Jagat across the sheer ice slope. Then somehow, instead of caving – she reaches down; replaces panic with courage and moves on. On a mountain, your mettle is laid bare.

Time dissolves. There is no past or future. You no longer have a name or life or wife or job – other than the next step. Everything superfluous to the climb is burned away in the flame of intense concentration. Fear now serves as fuel to feed the fire.

The verticality increases if that is possible, but we now all climb with a rhythm instilled from confidence in gaining ground; and if we just keep doing this again and again and again, the mountain will run out of these spine-chilling challenges Won’t it? I steal a glance upward. No end in sight. And the jagged ridge top not only soars upward, but it now seems to bulge outward – with enough cold, uncaring force to freeze and shatter the very nerves in your body.

Swinging out into space once again, hoping the protruding rock under my hands will hold and fighting the abrupt shocking tug of vertigo and gravity, I am so glad we are climbing at night, instead of the bright light of day when you not only feel, but see the sheer drop-offs below. I think: Night, blessed dark night – you blanket space!

High in the sky, Jerome pauses and we wait for the others to catch-up. My heart is hammering and breath coming in rapid gasps. The Maasai warrior, wearing a crown of stars, looks me directly in the eyes and says in his gentle, deep voice: “You are a very strong climber to keep up with me. You are the Lion of the mountain!” I hug him tight as a brother. (If only he knew how many moments of fear this ‘Lion’ had to fight through!) Reunited as a group, we now move upward and suddenly there is no burden looming over us. After six continuous, full-on hours of climbing – we’ve topped out! Strangely, we stand on flat ground and there directly before us, on the crater-rim of Kilimanjaro, in splendid, surreal isolation is a two hundred foot tall, flat-topped, white cliff that the eyes greet with disbelief! As if emerging from death and now re-born – with trembling legs and freshened vision, I totter over to the wall – to make sure it isn’t an altitude-induced hallucination. My gloveless hand extends out and touches. . . pure ice! A smile explodes across my face. “The Snows of Kilimanjaro!” I think. “This and the short story Hemingway wrote – one of the reasons why I wanted to be a Writer and so wanted someday to come to Africa and have Adventures and try somehow to live this Much. . . and love this Much. . . and Here – Here I am!!”

I stagger back to the others. In the bitter cold, huddled together, we watch strange wraiths of clouds blow in a fierce wind from the curved horizon and pour out over the glacier, fired pink and purple in the rising sun! We then turn and look out the other way, from whence we came – our comfortable camps and today’s struggle erased – inconsequential in the sheer immensity of infinite vista. . . And then yet another miracle. There, somehow before us is the perfect shadow of Kilimanjaro projected in midair by backlight! We stand on the mountain; yet see its double solidly before us!!

I turn slowly in a circle to take it all in. Every cell, every atom in my body is glowing with magic and intensity and love for the beauty and privilege of being in such a world!!!

We all collapse on a slope, totally overwhelmed. Jerome’s soft voice once again urges us on. The summit is still above. . . We all look up and give a collective groan. Where we have to go looms impossibly high – even more vertical than what we have just climbed! Jim Lorentsen mumbles the climb’s mantras: “Life by the inch is a cinch; by the yard it’s hard. . . Just rock-to-rock, bay-beeee.” We ascend. . . This alone, without what we had done, would feel frightening to climb – but now, hardened by what we have just come through – it’s like a relaxed, instinctual dance: making love with the last of the mountain – a woman fully yielding her secrets, for you have finally earned the right to her heart.

With no more mountain to caress – Kilamanjaro is climbed and honored to its fullest extent.

On the highest point, we all take assorted photos under the UHURU “Peace” sign – then Down. . . Sooo sa-wheeeet to be descending – “skiing” the steep scree slope; the air so PHAT after straining to get half the normal oxygen at 19,340 feet! Downnnnn. . .

Rolling upright, arms-out over the rocks; giddily singing songs top-o-the-lungs; releasing such a feeling of sky-high happiness and deep satisfaction – one of the most magical very-much-in-yet-out-of-body days on this Earth! I recall the Kalahari Bushman saying: “There is a dream dreaming us.” And Kilimanjaro: “Mountain of Greatness” now has four new Dreamers forever in its hold. . . “