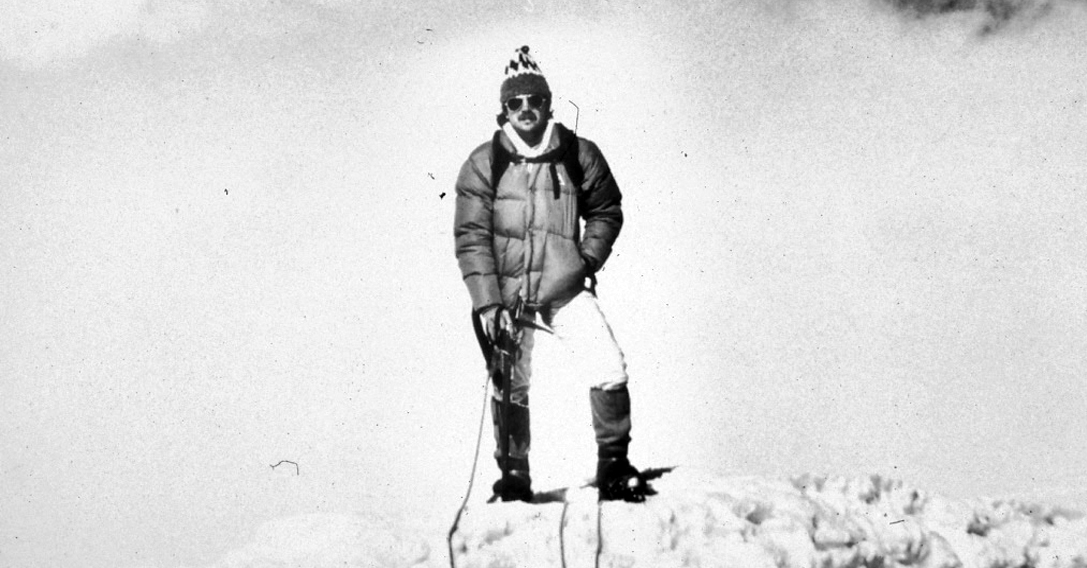 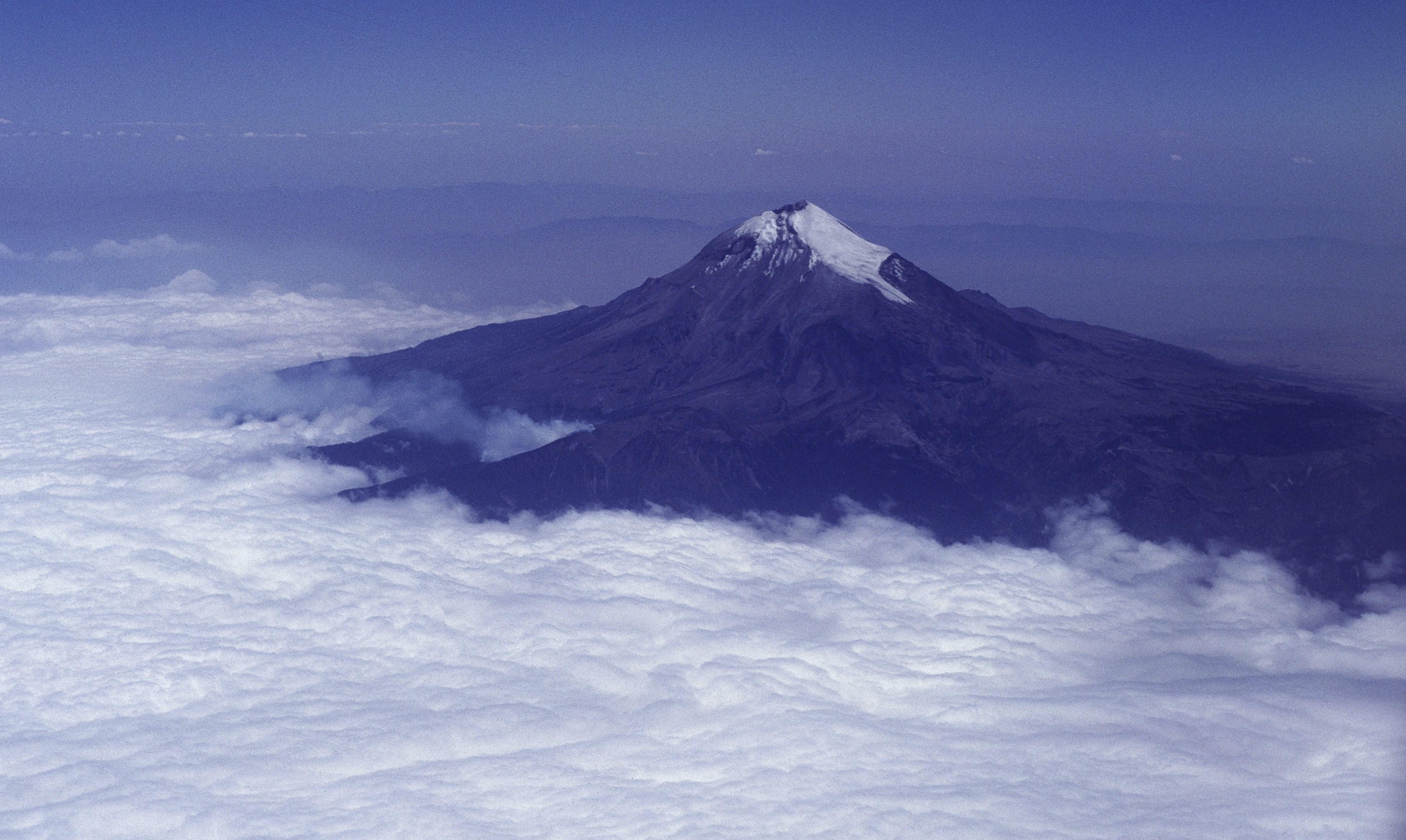 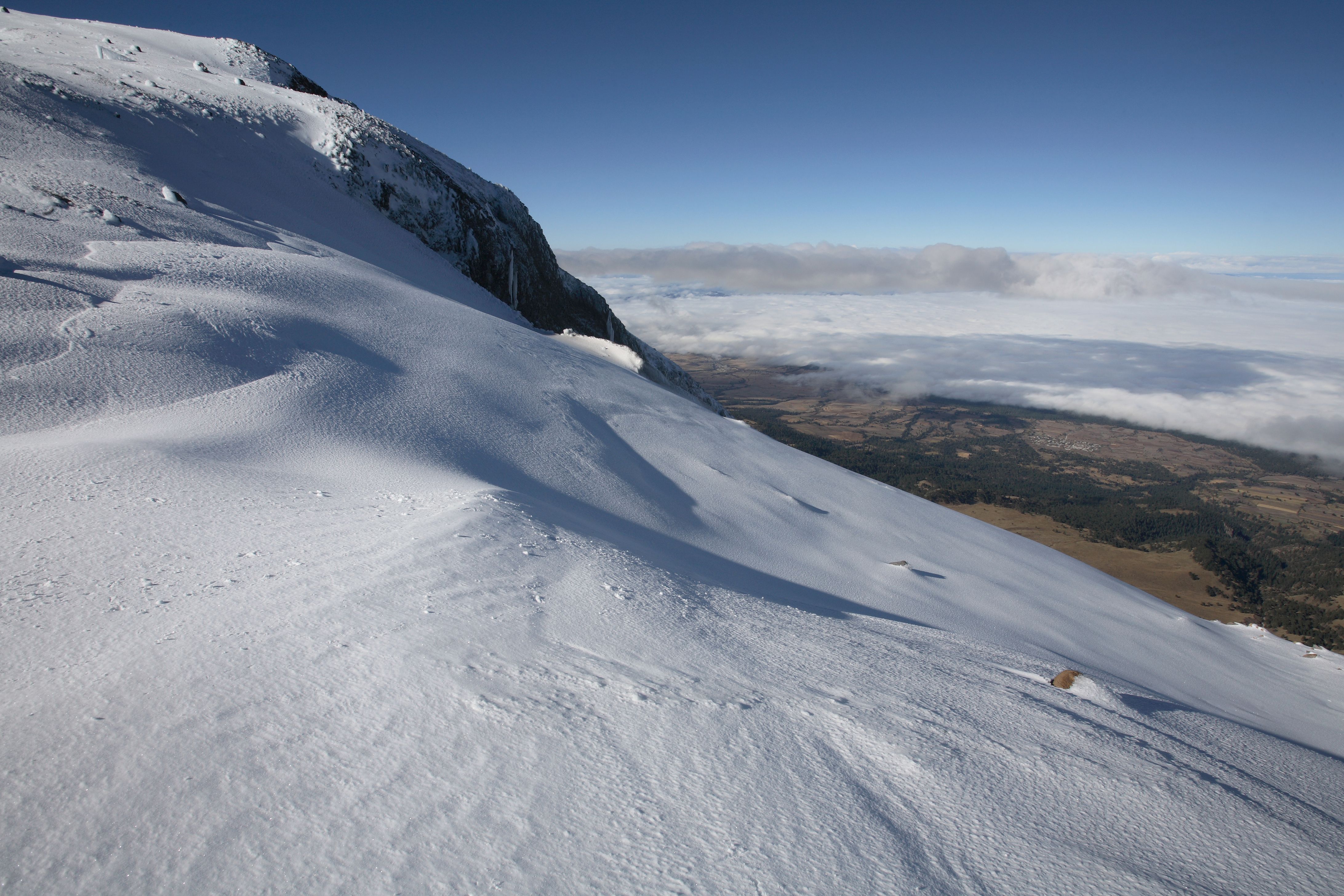 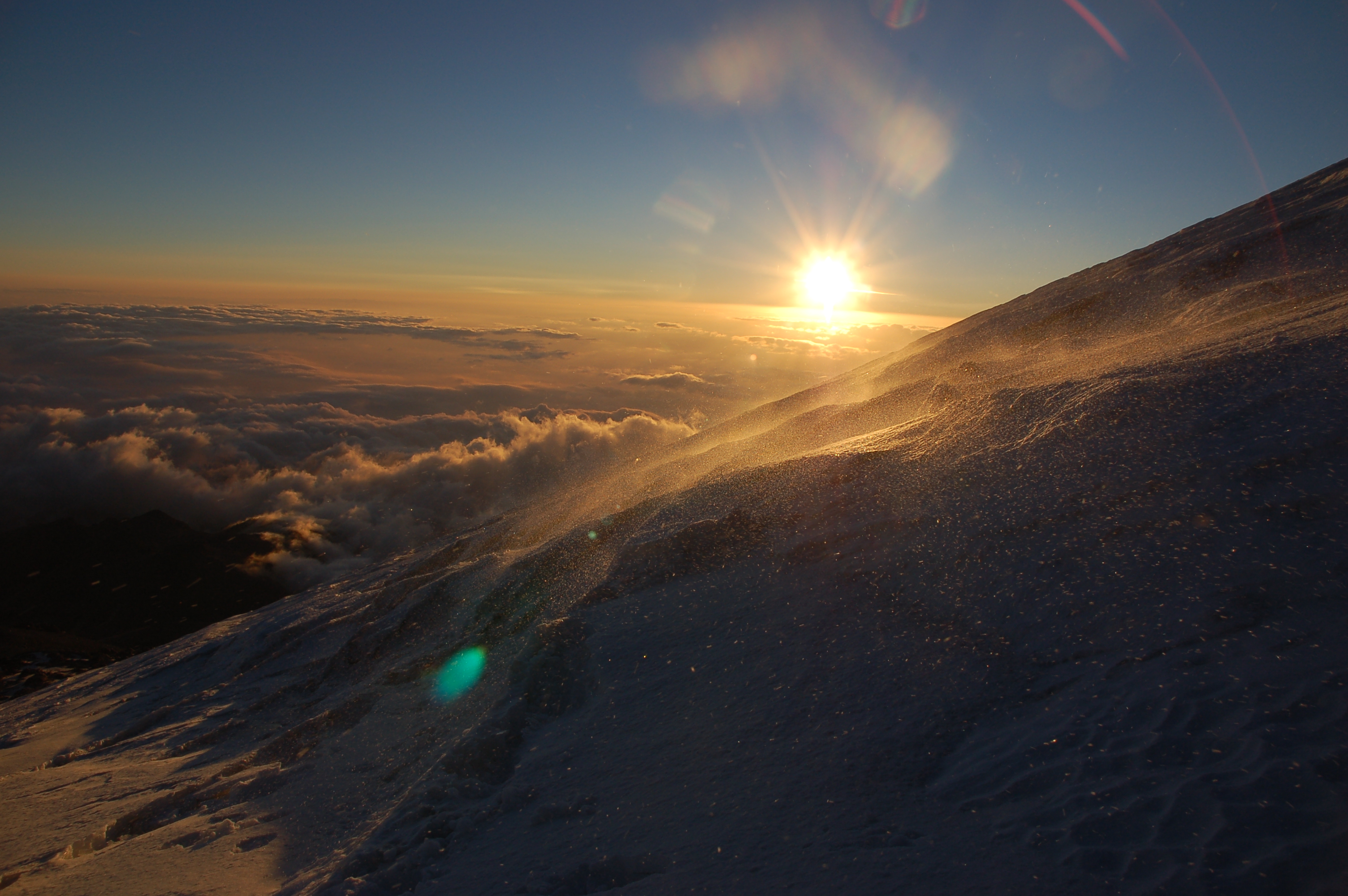 18,700 foot Orizaba is the highest peak in Mexico and the third highest in North America (after Denali and Mount Logan). Its Aztec name is Citlaltepetl, meaning “Star Mountain” – possibly because its snowy cap acted as a beacon seen from miles away at night. An excerpt from my book: Angeles Crest: “. . . After resting in a high hut to get acclimatized to the altitude, we roped together in two groups of three, and set out for the summit in the middle of the night when the snow was firmest. Many a lazy or lackadaisical climber has slept in and with the sun’s rays softening a skimpy snow bridge over a crevasse – cracked through the deceptive cover, plunging to his or her death inside an icy casket half-a-mile deep.

We set out at 4:00 a.m. in the frigid darkness. In the tiny beam of your head lamp you couldn’t see the climber in front of you – only the rope connecting you snaking forward across the snow as if with a life of its own. Kay’s group was climbing about a hundred yards ahead of us; she was in the third position with Greg and Frank ahead of her. You put your very best climber in the third position and I soon learned why.

In the coral-pink twilight, we could now spot the lead group ascending a steep, 50-degree slope high above us. Kay’s colossal energy had already driven them on ahead by 400 yards. They were small specks in a vast white amphitheater. Just when Peter, Marilyn and I paused to take a blow and look up to check their progress: we took-in something the eyes saw, but our brains refused to accept as really happening. . . Frank, the lead climber in Kay’s group fell – zipping down the icy slope in a nylon shell jacket. He committed a climber’s cardinal sin by not yelling as he came off the mountain. . . Greg, next in line, about twenty yards of rope behind Frank, had his head down and didn’t see Frank fly by. Frank is only about 140 pounds but his acceleration was enough to rip the 210 pound Greg off his feet and send both plummeting downward. In total shock, sliding helter-skelter, neither man uttered a sound. . . Kay, giving full concentration to the icy patch in front of her, saw a blur out of the corner of her eye. Without looking up to see what it was (then too late), she immediately did an ice-axe arrest (driving the sharp tip of her ice axe down into the mountain with your prone body weight, just behind the rope. Thank god, the axe ‘took’ and Kay’s 130 pounds were anchor enough, for a split-second later: the rope stretched taut – and Frank and Greg, turned upside down – came to a dangling halt.

Even though it all took place in the blink of an eye, somehow, as we watched it seemed to unfold in slow motion. If Kay hadn’t acted without thinking exactly when she did, she would have been peeled off the mountain, as well – and with the three of them speeding down the slope there was no way we had time to get over into their distant path to try to stop them. We would have had to watch them slide by us and free-fall thousands of feet off the glacier lip to their certain deaths: a sight no one should ever have to live with. (A month later, two climbers slipped in the very same area and plunged to their deaths.)

We power-climbed up to them. They were back on their feet, Kay shrugging off the gratitude and praise with a simple, matter-of-fact statement: “Next time you guys – please yell!!”

I was the rookie climber of the group, having only done Mt. Shasta before this. As we continued up the steep icy slope, I began to sweat in the frigid air. (If Frank and Greg can fall – where does that leave me?) It then got worse, with the slope steepening even more and the surface all hard blue ice. No matter how hard I kicked, of all the sharp crampon points covering my boots – only one of the very front fangs went in. . . Each time I pushed up, I stared down – wide-eyed at that one small point of steel, incredulous that it would hold my body weight plus heavy pack. I started to lose it, all my muscles going rigid with tension; panic climbing my spine. And being roped together, after what I had just seen, was an added burden: the link now more a curse than a blessing, for if I fell – a bad chance I would take Marilyn and Peter with me.

Just as my mind was bottoming-out, I heard a strange buzzing sound. Suffering from tunnel vision, I stole a glance out to the side and, incredibly, there was a bumblebee, a black and yellow aeronaut meandering up over the slope. Seeing that plump, vibrant bit of life on the frozen mountain broke the ice within. There wasn’t a flower within 18,000 feet, but that didn’t seem to concern the bee. Its steady, hum-like buzz unknotted my clenched nerves. I relaxed and moved on – following the bee in the updraft that carried it here.

We all made the summit of Orizaba without further mishap. And every time I see a bumble bee, I murmur thanks. . . “